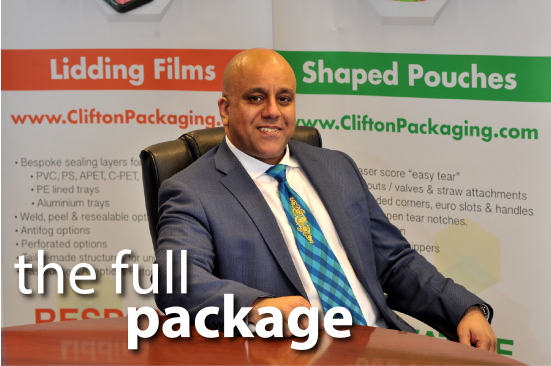 Although Clifton Packaging Group first began operations in London in 1981 as a wholesaler of plain carrier bags and paper bags for retail outlets, just two years later, the food packaging company relocated to Leicester to write the first chapter of the story that would turn it into one of the staples of the East Midlands’ business community. Over more than three decades, Clifton has evolved to become an end-to-end solutions provider, specialised in the manufacturing of packaging, packaging machinery, and contract packaging for the snack food, confectionery, bakery, health foods, we protein, and other FMCG markets.

Innovation has been a company trait for many years now and the past 12 months have certainly not been an exception to Clifton’s tireless efforts to release unique, industry-leading products. “We have added several new products to our portfolio since last year, including 100 per cent fully recyclable, resealable and compostable pouches, ovenable pouches that can withstand temperature of 225 degrees for two hours in the oven, and pouches with antibacterial coating,” explains Clifton Managing Director, Shahid Sheikh.
In a testament to the genuine originality of these products, they have been granted a patent, and Shahid expects that several more will be patented in the coming months, an encouraging sign for everyone at the company. The good news did not end there, however, as Clifton’s manufacturing excellence was also recognised externally when the company was presented with the 2018 ‘Insider Made in the Midlands’ Manufacturing Innovation Award.

Infrastructure development is always in Clifton’s sights, as the business is currently in negotiations for the building of a second manufacturing facility, not far from its existing factory in Leicester’s Meridian Business Park. “We need an additional site to help us cope with the expansion we are experiencing, and hopefully prepare us for the next ten years of development. I am convinced that a second facility will instil further confidence in our customers, as well, as it would reduce the risks associated with single-site operations,” Shahid reasons.

The preparations for Clifton’s next phase of growth have also included investment in new machinery. “Nearly £3 million has been spent on a range of new machines, such as a brand new KBA-Flexotecnica Evo XD press, a Bimec slitter, a new pouch maker, as well as Nordmeccanica Simplex and Super Combi 4000 laminators. We are expecting these machines to hugely improve our capabilities, but this is just the beginning. There are more machines in the pipeline for 2019 that are going to be installed into the new premises,” Shahid discloses.

He hopes that by the end of the year Clifton will have opened what he deems “a game changer within our industry” that will be the company’s new Packaging Centre of Excellence, whose provisional opening date is 18th October. “It is a place where we will be running regular seminars mainly for the industry, but also for schools and colleges. In addition, we are looking to set up an Education Centre within it, offering a great variety of accredited training courses.

“The topic of the first seminar we are going to conduct will be along the lines of ‘Come and learn about the Reality and the Myths of the ongoing plastics debate’, as this is the talking point across the market right now,” Shahid opens up on what he believes is the key issue that will mark the packaging industry in the years to come. “By building the Packaging Centre of Excellence, we have taken a very responsible approach to the plastics debate. Our goal is to create awareness and educate the masses on the myths that surround the actual reality of the options available to deal with recyclable films.

“Our industry continues to be attacked by people who do not fully understand the benefits of plastics. Clifton’s mission is to educate and enlighten the public, in the first place, and help it realise how grateful we should be to have a wonderful product called plastic at our disposal. With the utilisation of this product to create barrier films, for example, we have been able to extend the shell life of vital products, such as meat, bread, and various snacks,” he contends. “From my point of view, the problem is not the plastic itself, it is the attitude of easy and irresponsible waste disposal adopted by individuals, businesses, and governments. While I agree that single-use plastic should be a ‘no-go’ and that over-packaged goods need to be revisited, I disagree with the disrespectful way that nature is being treated at present times. We aim to lead by example, this is why all of our waste streams are collected by licenced companies, for which we are given specific certificates. There is a lot more that can be said on the issue of plastics, since it is an enormous topic, but I will save the rest for those who are interested in attending some of our seminars.”

Its educational function aside, Clifton remains fully focused on realising its ambitious five-year plan to achieve £30 million turnover by the end of 2020, and Shahid confirms that the company is firmly on track to reach this figure in the projected time frame. “Together with investing in new machines and a new factory, we are also increasing our workforce. As we continue to grow and are seen as disruptors of the marketplace, we will be looking to recruit new technical and sales people to add to our existing teams. Our model has always been based on building relationships first, for which our staff are instrumental, and only then proceeding to do business with our clients. We strive to upskill our current employees at all times, so that we can broaden our proposition and deliver excellent customer service. All in all, plenty of measures have been put in place to enable us to move forwards and achieve our objectives,” he concludes.